Once upon a time there were three Billy Goats Gruff; Little Billy Goat, Middle Sized Billy Goat and Great Big Billy Goat, who lived in a field in a green valley.  They loved eating sweet grass, but sadly their field became brown and barren because they were greedy goats and they’d eaten every last blade of grass.  They were still hungry anyway. In the distance they could see a field that was full of lush sweet scrummy grass, but alas there was only one way to get to it – over a rickety bridge over a stream.  However under the bridge lived a horrifyingly terrifying terrible troll called Trevor – he was always hungry too.  And there was nothing he would haveliked better than to eat a nice juicy Billy Goat.

The Little Billy Goat was the first to reach the bridge.  Gingerly he put one hoof and then another onto the bridge but because it was so rickety, however hard he tried, his hoof still went trip-trap, trip-trap on the wooden planks.

Suddenly there was a huge roar. ‘Who’s that trip-trapping over my bridge?’ and out from under the bridge loomed the Troll.

Quaking in his hooves, Little Billy Goat Gruff managed to squeak ‘It’s only me.  I’m only going to look for some grass to eat.’

‘Oh no you’re not!  I’m going to have you for breakfast, lunch and tea!’ 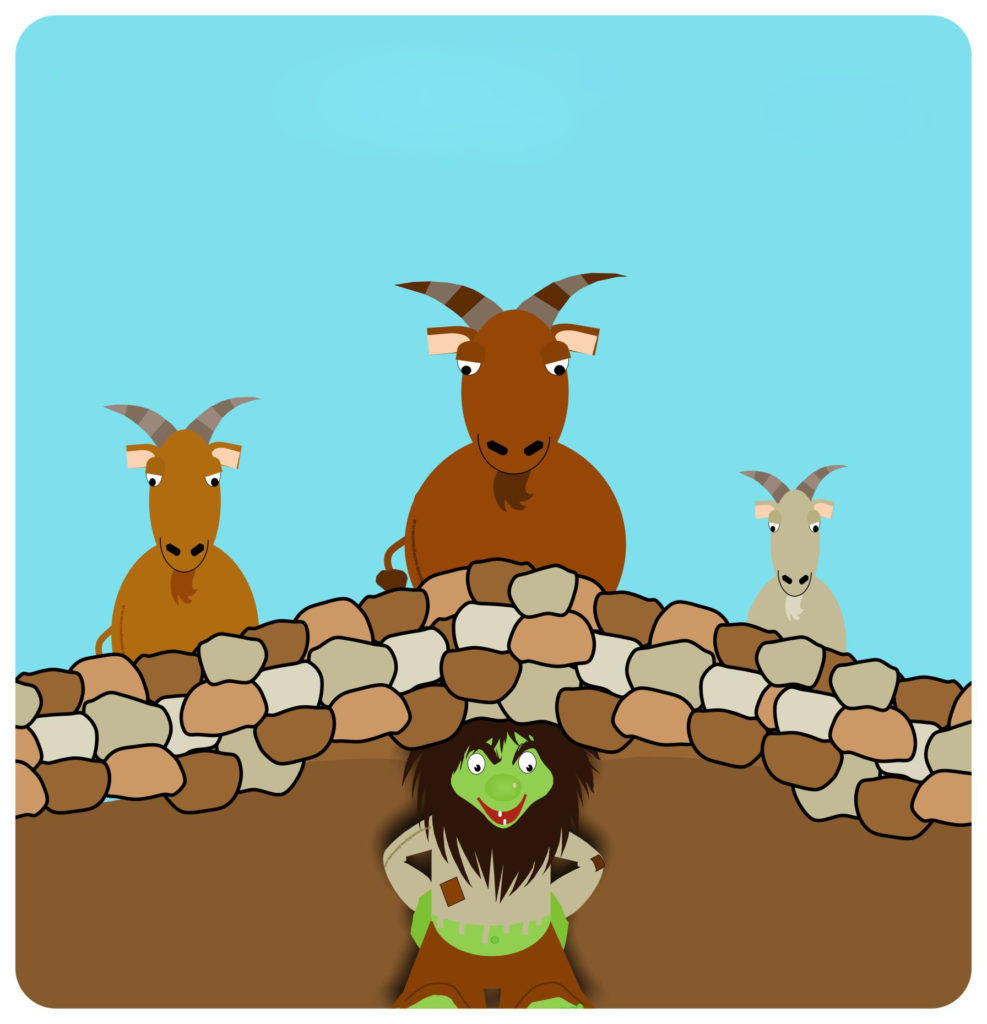 the fresh green grass on the other side. The other goats saw Little Billy Goat Gruff eating the fresh green grass and were jealous because they wanted some too.  So Middle Sized Billy Goat Gruff went down to the bridge and began to cross the stream.  Trip, trap, trip, trap went his middle sized hooves.  Again the Troll loomed out from under the bridge.

‘Who’s that trip-trapping over my bridge?’ he roared.

Quaking in his hooves, Middle Sized Billy Goat Gruff managed to say in his softest voice ‘It’s only me.  I’m following my brother, Little Billy Goat Gruff, so I can eat the sweet grass.’

‘Oh no you’re not!  I’m going to have you for breakfast, lunch and tea!’

‘Oh no, Mr Troll, you don’t want to eat me.  I’m not big enough to fill you up.  Wait until my big brother comes along – he’s much tastier than me.’

Big bold Billy Goat Gruff was jealous and couldn’t wait to get across the bridge and join his brothers.  So boldly, he put his hooves onto the bridge. Trip, trap, trip, trap.  Suddenly the Troll loomed out from under the bridge.

‘Who’s that-trip trapping over my bridge?’ he boomed.

‘I’m the Troll and I’m going to eat you for breakfast, lunch and tea!’

Then the Troll rushed at Big Billy Goat Gruff who bent his head and bravely charged at the Troll, snatching him up in his horns and tossing it into the stream below.  The Troll disappeared under the rushing water, never to be seen again.

From then on, anyone could cross the bridge and enjoy the sweet green grass with the Three Billy Goats Gruff.

The Ballad of John Barleycorn
by Robert Burns

There was three kings into the east,
Three kings both great and high,
And they hae sworn a solemn oath
John Barleycorn should die.

They took a plough and plough’d him down,
Put clods upon his head,
And they hae sworn a solemn oath
John Barleycorn was dead.

But the cheerful Spring came kindly on,
And show’rs began to fall;
John Barleycorn got up again,
And sore surpris’d them all.

The sultry suns of Summer came,
And he grew thick and strong;
His head weel arm’d wi’ pointed spears,
That no one should him wrong.

The sober Autumn enter’d mild,
When he grew wan and pale;
His bending joints and drooping head
Show’d he began to fail.

His colour sicken’d more and more,
He faded into age;
And then his enemies began
To show their deadly rage.

They’ve taen a weapon, long and sharp,
And cut him by the knee;
Then tied him fast upon a cart,
Like a rogue for forgerie.

They laid him down upon his back,
And cudgell’d him full sore;
They hung him up before the storm,
And turned him o’er and o’er.

They filled up a darksome pit
With water to the brim;
They heaved in John Barleycorn,
There let him sink or swim.

They laid him out upon the floor,
To work him farther woe;
And still, as signs of life appear’d,
They toss’d him to and fro.

They wasted, o’er a scorching flame,
The marrow of his bones;
But a miller us’d him worst of all,
For he crush’d him between two stones.

And they hae taen his very heart’s blood,
And drank it round and round;
And still the more and more they drank,
Their joy did more abound.

John Barleycorn was a hero bold,
Of noble enterprise;
For if you do but taste his blood,
’Twill make your courage rise.

’Twill make a man forget his woe;
’Twill heighten all his joy;
’Twill make the widow’s heart to sing,
Tho’ the tear were in her eye.

Then let us toast John Barleycorn,
Each man a glass in hand;
And may his great posterity
Ne’er fail in old Scotland!

(if you haven’t realised, this ballad is about how to make beer)